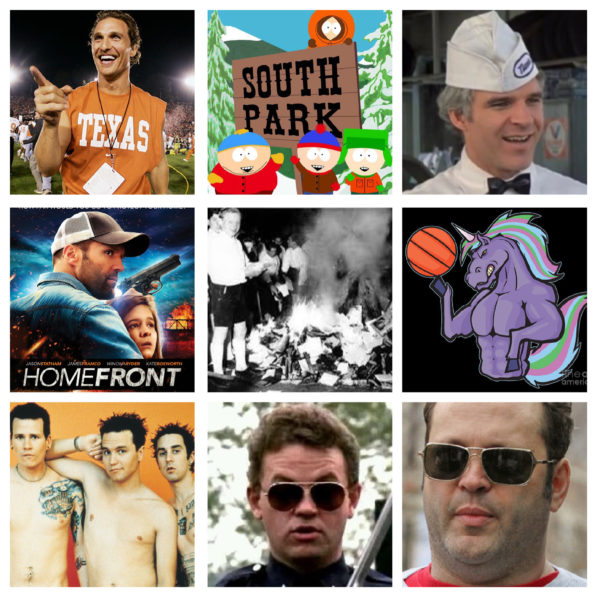 Donkey Basketball used to be a thing…Was it PETA or the high schools tired of having livestock on their gym floors that ended the show?

“E” is the most common letter and appears in 11% of all english words.

Everyone needs to practice leaving coherent voicemails & composing structured email/texts – Ain’t no one answering their phones no mo’.

1st World Problems: If it’s not the dishwasher, it’s the HVAC unit or the internet, lawnmower, hot water heater, the clothes dryer or washer, one of the vehicles, a computer or phone, something is always in need of attention or repair. I’m not sure that everything has been functioning properly all at the same time EVER in my adult life. And people have the nerve to question my cynicism as I wait for the next thing to break.

Conservatives have made their careers by banning, boycotting & burning books, businesses, music, film, art & games that insult the right-wing religious agenda. And now suddenly we have issues with censorship? GTFOH

The unicorn is the national animal of Scotland.

Kentucky bill being discussed that would criminalize anyone who “accosts, insults, taunts, or challenges” a law enforcement officer – Words hurt PoPo feelings? Sounds pretty ‘snowflakey’ to me. Isn’t that the word we use now?

So everyone is in agreement, both sides, that Matthew McConaughey should be Governor of Texas? Let’s get this done.

South Park Vaccination Special: (‘21) – I’m not a regular viewer in my older age, but those dudes are on top of the game. Brilliant and offensive as it ever was. Nothing is off limits, as it should be. A++

DAD JOKE: What happens when you go to the bathroom in France? European.

“Lord loves a workin’ man; don’t trust whitey; see a doctor and get rid of it.” – Navin R. Johnson